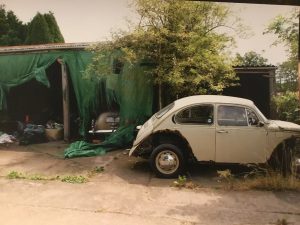 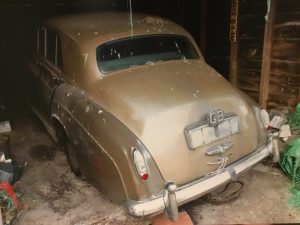 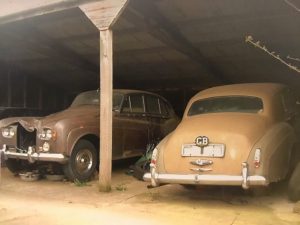 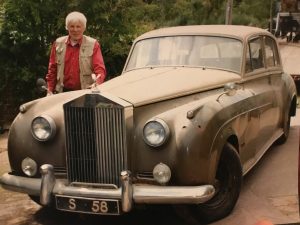 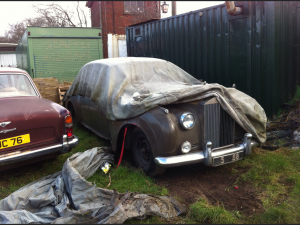 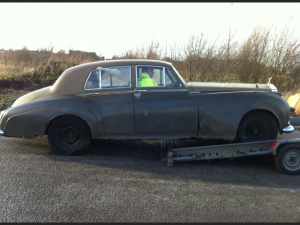 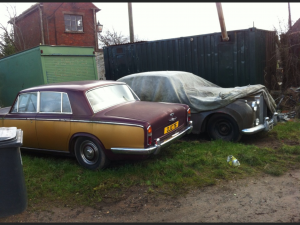 I thought I’d share this story with you to warn people to be cautious, you must always cross theT’s and dot the I’s

This story begins in the early 2000’s .
I advertised in many of the free mags, Bargain pages, loot, admag, sellit and also Autotrader.

It was in the spring of 2003 March 9th when I received a call from a Canadian man ( I won’t say gentleman) his name was John Wild.

john was a very likeable person and we were on the phone for a long time maybe 3/4 of an hour, he told me he had a Bentley S3 I think it was a 1965 (BOW 350C) with roof damage where it fell over in a container and a Rolls Royce Silver Cloud S2 chassis SYD 40 , john invited me over to his (rented) place In Ashley Abbots Bridgnorth  Shropshire.

on Wednesday 12th March 2003  (by arrangement) I made my way over with an air of excitement and  wonderment of what I was about to discover, as in the handwritten directions (before satnavs) I came across a fork in the road to my right  just up the hill and there I would see a red telephone ☎️ box, take the right fork this will lead you down a lane with Tudor building to your right, keep going until you come to a tight right hand bend then after 50 yards there’s a track on the left, go down that track and we’re just past the two houses with a gateway into our small courtyard.

on arrival I saw a white series 2 Land Rover with a Harvey Frost breakdown crane and sign written doors of a local garage, a vw beetle and a couple of Alpha Romeo cars (1980s-90s) all in various states of repair.

I was met at the gate by A white haired man with a limp, it was a John Wild, he invited me into the house where I met his beautiful wife, I was in my late 20s and although sh3 was possibly ten years younger than john she may have been in her 50s I thought she was very attractive.

we had a rathe long discussion about life in general and the state of the country before John took me back out to the barns to see the cars, the barns had green tarpaulins nailed to the front of them.

john hobbled over to the tarps and removed some weights to reveal the Bentley S3, it was in a poor state and had a large indent in the n/s rear quarter, the engine was in bits and scattered about in the barn, at this point the Rolls Royce was not for sale.

John and I shook hands and I left a deposit, John wrote a receipt had my £250 cash and I came home, excited and scared at the fact that I needed to find £2500 from somewhere.

within a week of agreeing the deal with John I received a handwritten letter barely legible.

dear Anthony, I am sorry to inform you that my son (Andrew) wants to restore the Bentley for himself, the letter contained a cheque for the £250.

i was very unhappy at this, I was always taught never to back out of a deal, a mans word or handshake is his bond.

i immediately called john and expressed my sadness that the deal was off.

I thought that was the end of that deal.

jump forward to 2009, February 18th  and I get a call from John again I knew it was John because his name came up in my phone as “John Wild Cloud”, john was shocked that I knew who he was, he once again offered me the Bentley S3, so once again I made the trip over to Bridgnorth.

and once again after much talking, mainly about immigration and Johns discourse about Muslims running a mock, and how disappointed he was that Flying Spares had only offered him £2000 for the Bentley  we finally agreed on a deal, which was actually the same deal as before only without the mini, so £3500 for the  Bentley S3, I even said to John, “I am actually going to buy this car this time”, he said that he finally came to the conclusion that he nor his son would ever get round to restoring the car, he also asked if I knew anyone who would be interested in the Landrover ( yes it was still there) I asked how much and he said £500, I said well why don’t I list it on my EBay account for him, he agreed and said anything over £500 I could keep for my time and expenses, I took photos and went home.

The next day I listed the Landrover on eBay, at this time me EBay ID was “Bentley Breaker”

A Week went by and I received a call from John, he said that his son wanted to sell the Bentley himself on eBay and that the deal was off again! And that he saw that the Landrover sold for £600 so his son wanted all the money and I was not to have any even to cover my costs.

I was fuming! And I told John in no uncertain terms that I was not happy having being messed about for a second time, I ended the call and considered litigation, however within a few days EBay notified me of a Bentley S 3